No cheering, no hoots of delight, in fact no shows of
emotion of any kind are permissible in the ‘Writing Press’ room while covering a
Major League Baseball game. 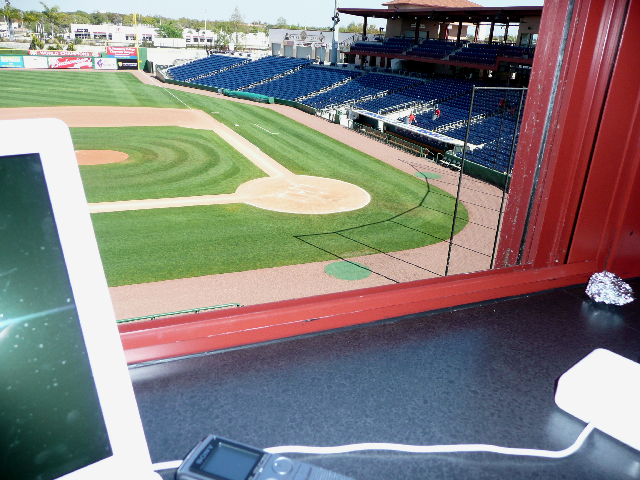 A laptop, voice recorder, cell phone and a deep
well of skepticism are sufficient, and I had at least three of four covered
when visiting with the Philadelphia Phillies in Clearwater, Florida last week.

Losing the World Series left the Philadelphia Phillies with
a sense of unfinished business heading into the off-season last November. Not
getting there at all had 28 other teams wondering how they could improve enough
to make it while the Champion Yankees sat in the seat everyone else wanted.

Warm-weather states Arizona and Florida played host to the
major league teams for a month and a half starting in mid-February. During this
time established players went through their established preparation routines,
fringe players hoped to make the team and everyone hoped against hope not to
get injured before the real action started.

Just before the end of Spring Training the Phillies
discovered that one of their starting pitchers, Joe Blanton, would miss up to 6
weeks with a strained abdominal muscle. Speaking to Joe Blanton in Florida last
week he looked almost bewildered. At 29 years old he had never even missed a
practice session due to injury and had done a full two hours of warm-up exercises
before this problem occurred, which he said felt like “someone had stuck a
knife in my side”.

Fan chat rooms had been full of barbs about Blanton being
too fat to pull a stomach muscle so I found myself checking and double-checking
his midriff as I stood there, three feet in front of him with voice recorder in
hand. From what I could tell, Blanton is tubby like I’m a 230lb ballet dancer.

Earlier that morning with the reporters gathered around
Phillies General Manager Ruben Amaro in the dugout, most of them wanted to
probe about pitching depth. “We have some bullpen depth…we don’t have a lot of
starting pitching depth. There’s a hole there between the major leagues and
A-ball”, Amaro said. Particularly after top prospects were dealt away in the last
two seasons, culminating in the acquisition of the game’s best pitcher”: Roy
Halladay.

After the game I asked Phillies Manager Charlie Manuel which
of his bullpen pitchers he had confidence in going into the new season –
bearing in mind the injuries and new faces. Out of seven guys he has going into
the season he gave me one name without hesitation: “I got a lot of confidence
in Madson…he was close last year and he should be right there this year as far
as, y’know, his confidence”.

As for hitting, while the Phillies have perhaps the best
lineup in the National League, they are not without their question marks. One
of those is Raul Ibanez – a 38-year-old veteran who had an MVP-calibre first
half of the season but battled injury the rest of the way. During spring
training his average was below .150 and during batting practice on Thursday
Charlie Manuel seemed intent on helping him to relax his shoulders and his
overall stance, emphasising a fluid swing. His instructions seemed similar to
those I have given Little Leaguers on many occasions here in Cayman – some
things can’t be repeated often enough even when you’re a multimillionaire star
at your sport.

Last Thursday was the Phillies’ final spring training game
in Florida, the last in a series of 25 warm-ups games by the end of which
players, backroom staff and media alike are desperate to get away and have the
real action start. The Phillies starting pitcher for the game was Jamie Moyer
who, at 47, is the oldest player in the major leagues. He had returned from two
surgeries and three hospital stays in the off-season to win the final starting
pitching slot, and in this game pitched a solid six innings to pick up the win.

Given his recent history of illness and injury he was asked
about whether he felt healthy enough to pitch, which is how most of us
non-professional athletes think – are we healthy enough to do x and y. Moyer on the other hand looked slightly bemused at the question
and replied, “If I can pitch, then I’m healthy. Why worry about health?”

Renowned for his dedication to the job, Moyer was then asked
by the reporter next to me how he felt about having walked only one hitter in
26 innings during the spring. Moyer looked at him blankly and said, “I haven’t
walked anybody”, and while the rest of us started laughing, continued, “It’s
the one thing I keep track of [in Spring Training]”.

Writers at least attempt to track a whole lot more –
unemotionally, of course, making it easier for those writers who are not fans
of the team they are covering.

The following night I sat in the stands in St. Petersburg,
Florida, to watch the New York Mets versus the Tampa Bay Rays. I was able to
roar with delight when ex-Phillie Pat Burrell blasted a double to the centre
field fence that silenced the taunts of a Mets fan behind me – a moment that
made up in gut satisfaction what it lacked in creative expression.