Trades Unions came to prominence as they helped ensure a
living wage and safer working conditions for abused workers. They were
invaluable during European industrial revolutions in preventing the worst excesses
of employers whose only concern was profit, never mind the human cost.

The Major League Baseball Association is a trades union that
represents about 1,000 players, and is increasingly unworthy of being
associated with the interests of the workers, i.e. players. Securing free
agency in the 1970’s took players from being little more than well-paid bond
slaves to having some kind of say over their lives. Uncovering and being
compensated for the efforts of owners during the 1980’s to artificially keep down
salaries helped ensure more of the profit went to the people doing most of the
work, but since the 1990’s what has the Players’ Association done?

Two things primarily: nothing about drugs and nothing about
maple bats. It is well-documented that there is plenty of blame to go around
when it comes to steroids: more home runs by artificially enhanced physiques
led to more spectators and more money, so everyone colluded in turning a blind
eye to the fact that hundreds of players were losing their health, and in some
cases their lives, as a result. The Players’ Association continues to fight
hard to minimize the usefulness of drug testing as an impingement on the rights
of their members to…well, to cheat, to damage the integrity of the game and to
damage themselves. 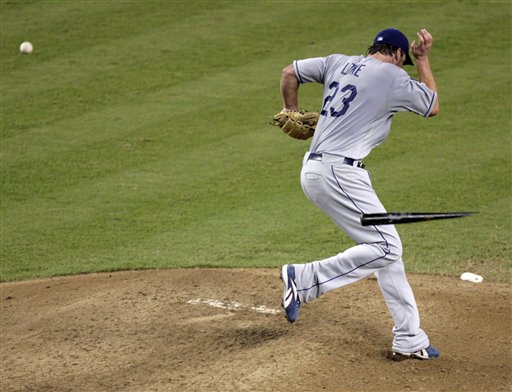 happens is not in the interests of their
own members.

Chicago Cubs’ rookie Tyler Colvin was on second base Sunday
when teammate Wellington Castillo hit the ball to the outfield. Colvin turned
to follow the track of the ball as he was running towards third base, and as he
did so a shard of the bat struck him in the chest, puncturing his lung.

So what’s the issue? Historically, players have used bats
made of ash, which, when it breaks, tends to shatter with no risk of bits of
wood hurting anyone. However in recent years maple – a harder wood that may
help the ball travel further – has become increasingly popular.

The problem is that when the bat breaks, it tends to break
into two or three shards, with the barrel-***-javelin end of it frequently
hurtling either into the stands, into the dugout or across the infield.
Spectators have been hurt, Pirates’ coach Don Long was fortunate not to be
killed when struck in the face earlier this year, and now a player has suffered
a serious injury for which he is still being treated to prevent his lung
collapsing.

The players have created a monster. They won key financial
rights and safeguards through the use of lawyers, but by allowing lawyers to
head their own trades union, they are being led by people more interested in
the immobility of law than even the preservation of life.

The players’ association worthy of its name should surely
have decried maple bats from the start, advising their members to avoid them
and pushing major league baseball to remove them from the game. But no, they
stand idly by, proud that no perceived liberty is being impinged upon, content
that these potentially lethal tools are being used, and waiting for tragedy –
as it surely will – to force their hand.