Let’s be clear, I don’t want the Yankees fixed. Their wanton splurging of cash over the free agent landscape has won them most of their success over the years. Notable exceptions of the mid-late 90’s teams that benefitted from the more semi-wanton sprinklings of money on the likes of Paul

O’Neill and Scott Brosius. But they have more money than anyone, and more fake fans than anyway, just like Manchester United, whose hundreds of millions of fans include a vast majority who watched ESPN once, saw them win and thought “Oo, I’ll support them – they win lots”. So yes, I am bitter, and I don’t want them fixed.

But if I DID want to fix them in a hurry, here are a few things I’d do.

He costs $25m a year and rising, he has warning track power and he serves as a gigantic distraction from this little thing called ‘team’. When he’s not hitting on Australian models in the crowd he’s mostly getting beaten by hard stuff inside and soft stuff away. If they’re lucky, the Marlins will agree to pay him $10m/year of that salary so the Yanks should trade him for a bag of chips. As for the notion that A-Rod wouldn’t wave his no-trade clause – he’d sign it like a shot if it was made plain to him he’d been a bench player from here on.

Yes, he’s definitely the best pitcher on the market, but he’s also hopelessly fragile mentally, in a market that eats up even relatively stable individuals. He needs to stay West Coast or go small-market – he’d be dead in the water before the end of Spring Training otherwise.

Closers are over-rated as a breed, but Mariano Rivera is massively over-rated. That’s not to say he isn’t brilliant because he is, but the idea that the almost-perfect, pressure-cooker trhriving Sorianio should be allowed to walk because a 43 year old has decided he’s going to play another year is laughable. Mo didn’t flinch from nailing the Yankees to the wall in all his contract negotiations so they needed to man up and tell him it was their call – not his – whether he came back for another year.

As for the Red Sox, I used to really like them. Pre-2004 that is. I felt sorry for them – to be that heavily scrutinised by the media and yet to have no success in 90 years to show for it. OK they’re rich, I thought, so sympathy is at a premium, but poor little chaps to play second fiddle to the Yankees for so long. Their World Series win in 2004 was wonderful, not least because of their historic comeback against the Yankees in the ALCS. But after they won again in 2007, Boston fans started sounding a lot like the most hard-boiled of arrogant Yankee fans.

So I don’t want them fixed either – in fact, I’m gunning for an Orioles/Rays domination of the AL East for the next decade. But if I DID want to sort out this 93-win train wreck of a franchise from a year ago, here’s what I’d do…

Really, the quota of common sense versus fan pressure that prevailed when they traded away Josh Becket, Carl Crawford and Adrian Gonzalez was remarkable. Gonzo’s a stud, but he had to 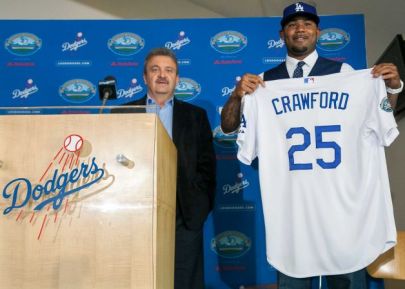 go to persuade the Dodgers to take the Crawford and Beckett millstones, but this was a good day for the Red Sox. Not great, because it essentially admitted they’d messed up before. It was perhaps the Red Sox’ Dunkirk: a humiliating retreat that nevertheless cleansed the strategic palate.

The Crawford contract was ridiculous. Seven years and $142million for a player who relies on speed and turned 30 in the first year of his contract…well, it’s almost as if then-GM Theo Epstein wanted to torch the Red Sox before leaving them. Just embarrassing.

Jacoby Ellsbury would fetch them a decent return and they have plenty of hitting to thrive even without him. They need someone, a no.2 or 3 would suffice, to back up what they hope will be a rejuvenated Jon Lester, who went from unhittable to meatball-merchant in less than a year.

All being well though, none of this will happen, common sense will disappear like the morning mist in a hundred degrees, and I’ll be writing an off-season column next year entitled, ‘Rays/Orioles Axis Set to Dominate’.