Maybe that’s not fair. Maybe money doesn’t make people stupid – it just allows for the stupidity deep within to rise to the surface.

Exhibit A for this case is Alex Rodriguez, whose 10-year, $250m contract with the Texas Rangers was secured because of his history of hitting for average and power. There was l 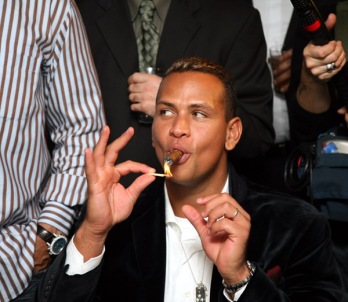 ittle expectation he was going to get better during the life of the deal – he had already played 7 major league seasons when he signed it. They weren’t projecting improvement and paying on the basis of that; rather, he got the money because of what he had already shown himself to be.

Unfortunately for Alex, when he got the money his inner stupid came out, and he decided that in order to justify such a ludicrously large contract, he needed to be better than he had ever been. And the only way to do that was to take drugs. So he added steroids, an extra 10 home runs a year and “cheater” to his resume.

The late George Steinbrenner obviously had an inner stupid that seemed to pop out with uncanny frequency, which ultimately has left his sons in a financial sinkhole that they have to try and dig themselves out of this off-season or face the horrific luxury-tax consequences.

But while people may lament George’s passing, they no longer have to live life without a stupid owner with a penchant for laughable excess. Ladies and gentlemen, may I present to you…[drum roll]…Magic Johnson and the rest of the ownership group of the Los Angeles Dodgers…[cue applause].

You see, one of George’s major faults was over-reaching for success today in a way that obliterated the hopes for tomorrow, trading away prospects and/or financial flexibility for free agents who by and large would have taken LESS to play for the storied Yankees but almost always ended up with a lot MORE than anyone else was offering.

And really, Steinbrenner can’t have been all that stupid. After all, he bought the Yankees for $8.7m in 1973 and by March 2012, Forbes magazine had the franchise valued at $1.85bn. That figure that would be markedly higher were the family ever to actually sell the club, bearing in mind the new owners in LA outbid themselves by about $0.5bn when they paid $2bn for the Dodgers this summer.

After buying the club they made a series of trades that somehow made even the profligate Phillies look far-sighted, when soon-to-be-free-agent Phillies outfielder Shane Victorino was traded for high level pitching prospect Ethan Martin and a promising reliever. But that paled into insignificance next to taking on the ballast of a Carl Crawford contract that pays the hobbled speedster $20m a year for another 5 years, and an Adrian Gonzalez contract also netting the hitter over $20m a year into his late 30’s. Never mind Josh Becket and his disappeared fastball at $15m per annum.

And then, this off-season, the Dodgers “won” the “race” to sign free agent ace pitcher Zach Greinke. Greinke’s an excellent pitcher – occasionally elite when he gets his pitches

moving around like he can. But 6 years and $147m? For a guy whose ERA last season mirrors that of the existing Dodgers staff combined? Value it ain’t.

And the stupid tree in LA grows tall, as it turns out local icon and new minority owner Magic Johnson has also bumped into a few of its branches.

“We missed the playoffs, so now we’re spending all the money to make it not happen again.”

That’s a Freudian slip right there – “we’re spending all the money”. Words such as “plenty”, or “enough”, or “in line with our income” clearly weren’t going to get folks excited, but if you promise to spend “all the money” – well, that’s a real ‘commitment to winning’ right there. And a ‘Get out of jail free’ card if it turns out Greinke goes back to his adequate, non-dominant self when the pressure comes.

It’s sad but Dodgers are starting to resemble a poor imitation of the Yankees between 1990 and 2005: the talented home-grown core and now the reversion to free-spending lunacy. Only difference is the 90’s Yankees won three World Series, while the Dodgers haven’t even been to the Series for a generation.