The 2014 baseball is only two days old as I write this…or four days old if you count the Diamondbacks v Dodgers two-game set in Sydney over a week ago…which I don’t.

It didn’t take long for the first “HUH??!!” moments to appear and remind us just how dumb, weird and flat-out awesome the world of baseball can be. Here’s a quick look at what’s been going on:

Ryan Braun was suspended last season for 65 games for taking Performance-Enhancing Drugs, a betrayal he had the temerity to term a “mistake”, as if he’d put too much milk in his bowl of Wheaties. It set a terrible example to fans and it deprived his team of their best hitter for more than a third of the season, and came after escaping a previous ban on a technicality. 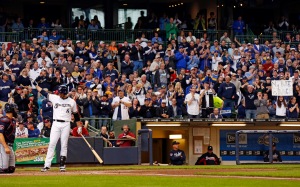 So what did the Brewers fans do at his first at-bat of the season? They gave him a standing ovation of course. The kind of ovation you’d give someone if they’d come back from the adversity of, say, cancer, or a horrific injury, or because they’d won the MVP award last year. Or…apparently…if they’ve cheated, lied about it, been caught and then served a very lenient ban.

I’m trying to imagine taking my son to that game, applauding Braun and then having an honest conversation about it…

Son: Dad, why are you clapping Ryan Braun more than the other players?
Me: Because, I’m glad to see him playing again after missing the last 65 of games of last season
Son: Why wasn’t he playing in those games?
Me: Because he was banned for cheating
Son: So shouldn’t we be booing him for betraying baseball, betraying our trust, trying to derail a drug tester’s career by making false accusations about him, and lying about what he had done and then afterwards making out like he wasn’t even really responsible?
Me: No son, of course not. That’s how we treat other teams’ cheaters, like A-Rod who should have been kicked out of baseball for his lying and cheating. When the liars and cheats are on our own team we treat them like conquering heroes instead to try and make them feel better.

The Philadelphia Phillies’ Cliff Lee is an outstanding pitcher, a true ace over nearly a decade spent in Cleveland, Texas, Seattle (for about 5 minutes) and Philly. In Monday’s opener against Texas, however, he stank the place up, conceding EIGHT earned runs in five innings of what could loosely be described as work.

That however was merely strange – the weird thing is that he picked up the Win. That’s because the Phillies were able to beat up on Texas rookie Tanner Scheppers, leaving the ballpark with a 14-10 win that at least for a day banished the worries of an offense that had seemed anemic throughout spring.

The baseball season just started…didn’t I mention that already?