Nothing has really and truly happened to me unless I’ve written about it and have photos. Not because I need “the world” to know what I’ve done, but perhaps because my memory is so appalling that if I don’t write about it I won’t properly learn the lessons or enjoy the recollections that I could or should. Which is why I am here, five months after the event, writing about training for the December 2013 Cayman Half-Marathon.

As per my previous and only post about running, a so-called friend of mine who shall remain anonymous – let’s call him ‘Marco Miranda’ – persuaded me on the strength of a throwaway 6-word comment to get into distance running, a mere 10 weeks before the event he recommended I enter: 13.1 miles of staggeringly pointless road-running. To be fair, his comment fell on the fertile ground of my having already started to run on my own – for no good reason – distances ranging from a somewhat unpleasant 2 miles alllll the way up to the almost inconceivable length of 5 miles, which had almost been the death of me, or at least if felt like it.

With only 10 weeks until race day at the point I started training, I had to skip a couple of weeks of my iPod-app-mandated schedule, and hope that my body didn’t protest too much.

It wasn’t the skipping of two weeks of the training schedule that had me in trouble. The fact of having a decidedly dodgy left hamstring had me in trouble. In my late 20’s, when I was out on hour-long midnight walks as part of my attempt to get down from my 255lb peak, I noticed that after about 20 minutes my left hamstring started to feel uncomfortable. Having done almost no exercise in the intervening decade other than a few games of football 8 years ago and some softball, the hamstring had left me alone, and yet here it was again, protesting. It hardly seemed fair: a decade of rest but there’s still something wrong with it. So having just started this grand, dumb idea of running a half-marathon, it seemed I’d be doing so with a permanently gimpy left side. Great. 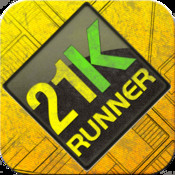 4 days of running per week, as the programme had me doing, was about 3.99 more runs a week on average than I’d been doing over the rest of my life to that point, but the idea of running a Half had really got its teeth into me. Before a couple of weeks of training were done, I knew that I’d be doing this, even though I still couldn’t see how someone who felt dangerously oxygen-deprived and beaten up after 5 miles in September was going to make it to 13.1 miles on the first Sunday in December.

Almost all my weekday runs were on the treadmill; 180-185lbs is still big for a distance runner, I’ve got bad knees, a degenerative back condition and had an ankle operation a couple of years previously; even though this Half was to be a one-off, I wanted to take it easy on my joints by doing everything except the weekly long run indoors where my body would take less of a hammering. And all that work I’d been doing to keep bulking up, the painfully slow progress at bench-pressing 10x175lbs followed by two sets of 10x185lbs and trying to get north of there…that was about to go out of the window, which was OK because I could go back to it after I was done with the Half. Right?

In the back of my mind I also figured that given the state of my joints and my lack of giftedness at running, the odds were that I would get injured before the Half and be back on the weights anyway, but at least being able to say that I tried, and not giving up through lack of effort but due to the shoddy build quality of my body. In the meantime I started having physio on my hamstring, which hadn’t become worse but refused to heal – it stopped me going fast, it made me feel vulnerable and it made every single run an exercise in pain management.