Four months felt – motivationally – like a long gap between my first half-marathon and the follow-up I was champing at the bit to do. So my imagination became overactive thinking about other possibilities: whether running was now my “thing”, what other half-marathons I could maybe do during the year. I even gave passing thought to the marathon – an event I knew that I would never do. I mentioned it once to a friend of mind called Roger, who agreed that my pork rope struggles seemed to indicate that the longer distance was not in my future.

As a Coach had ruefully pointed out to me around the same time, running a half-marathon and running a full marathon are completely different undertakings. Contrary to what many people think, running a marathon doesn’t damage your body in a bad way (other than the muscle fibre tearing that is inherent to all strenuous exercise), but that assumes appropriate training, and the amount of training that you need in order to be ready to push your body that hard on race day exacts its own toll. Hence the need to taper down the training for at least two weeks before the race, to give your body a chance at being fresh enough for the event itself.

All of which was immaterial to me because I wasn’t going to run a marathon anyway. Half-marathons are daft enough an undertaking and a big enough achievement for a recovering fat guy like me. Thinking about the full marathon almost smacked of discontentment. Why should I not be satisfied with what I had already achieved in running the Half, and just keep going with some of those to keep me in shape?

Why even contemplate the full?

Again it came down to (in)opportune encouragements. With my thoughts about the event rattling around in my mind, a subsequent conversation with Roger two months later as I continued to train with hamstring discomfort that really wasn’t stopping me train, he said with a shrug, “Absolutely you could run the marathon”. Sure, the 3.30am wakeup calls are hard.

That still didn’t make it a good idea, but more or less on a whim I applied for entry into the New York Marathon, two days before 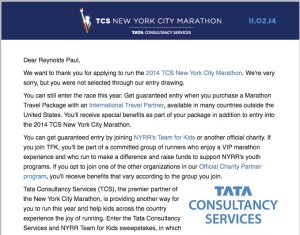 the deadline. Next morning I told Rachael what I’d done – she was very surprised and equally pleased that I’d gone for it. My son Jude was completely unsurprised. “Of course you can do it”, he deadpanned. “If YOU want to do that, you can do it”.

Which was awesome right up until I got the rejection email from the marathon the following month to say that I hadn’t “won” a place in the marathon lottery. But surely there was a compensation, right? I mean, at least now I wouldn’t have to go through with that idiotic idea to run half-way around the world…or wherever it is that 26 miles and change would get me…

(Un)fortunately I was by that point sufficiently bitten by the bug of the idea of running a marathon that I immediately started looking for an alternative race to make my debut at that distance, and ultimately registered for the Disney World Marathon 30 minutes after registration opened.