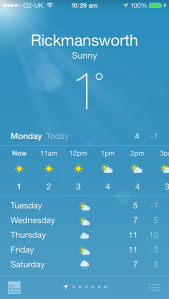 Having decided to catch up on all my running with this blog, unfortunately some posts are happening well out of chronological place, such as this one which should properly have been posted before the Ocean City Half-Marathon review.

As I sit here about to post this entry, I’m getting ready to head out for a 16-miler. In 1 degree weather. Or 34 degree weather, depending on your thermomital perspective. Of course when I say “getting ready”, I mean “delaying, hoping I can increase my fitness and speed without the need for 8 miles at 9:30 followed by 8 miles trying desperately to average 9:00…”. Oh well.

So here’s a blog entry for early September…

If I were king for a day, Cayman would have a full set of pavements/sidewalks. For runners especially but also cyclists, many of the roads can be hazardous because rather than the road ending in a vertical slab that ushers rainwater towards gutters and forms the edge of a sidewalk, it just peters out. There’s tarmac, then there’s less tarmac, then there’s a scraggly edge where they just quit putting it down, so you have an uneven, unstraightened “line” with an inch or two’s dropoff to dirt. So long as you have your eyes fixed on the road just in front of you, but you really can’t afford to look up.

My LSR three weeks ago was supposed to be 17 miles – a new longest-ever to best the 16 miles I had done about a month previously in England, in cooler conditions but with a whole lotta gradient going on. I wasn’t too sure how I was going to fare, given that I hadn’t been this far in a month, but figured with the Canterbury Half in between, I should have enough stamina to get me the distance.

My route was simply to leave home, run 8.5 miles south, add on a couple hundred metres to allow for my optimistic Nike GPS watch, then turn around and go home again. My 4.30a.m. start on the Sunday morning was an unwanted PB, with 3.45a.m. alarm necessary to get me up, caffeinated and, subsequently, conscious. (I got into this training thing figuring I only needed to set my alarm for 5 minutes before warmups, but from all I read, that’s a thoroughly bad idea as you have to spend time sweet-talking your legs and core muscles before they’ll even consider the stupidness of a Sunday morning LSR).

The first few miles heading south were fine, and after about an hour I started running through the Fillipino rush hour. A disproportionate amount of the country’s security guards are Filippinos, with some Nepalese and other nationalities represented. They’re mostly on bikes, and are mostly friendly – perhaps because when you’re forced to be on the road at 5.30a.m., the sight of someone voluntarily on the road at that time gives you an immediate feeling of superiority. I can hardly begrudge them that. Going through George Town and the freight dock, my question as to when anything every happened at that place was answered as the place was a sea of lights (and sea), and a hive of activity.

By the time my GPS said 8.55 miles and I made the turn, I was beginning to realize the last 8.5 miles would be even less fun than I feared. Not that anything physiological was about to shear its moorings, but I felt heavy-legged and the attitude problem that started down there had worked its way up to my brain.

The next four miles was a slog, and the increasing light didn’t help – it just gave me a clearer picture of how absurdly far from home I still was. Around the 12-12.5 mile mark I looked ahead of me up the West Bay Road to Public Beach and almost immediately my right foot landed on a “let’s not put any more tarmac down here” edge of the road, and my ankle rolled over.

It rolled over pretty darn well actually, though I say so myself. If the jogger on the other side of the road had cared to look across at me at that moment, she could have had a good look at the sole of my right shoe, even though I was vertical. Sheer momentum (my only friend when it comes to compensations for being larger-than-a-long-distance-runner-oughtta-be) kept me going. So I shouted but carried on running.

The shouting became more of a growl as I realised that I wasn’t going to be able to just run this one off. But then I figured it’s 6.30am on a Sunday, I’m about 4.5-5 miles from home, so the quickest way home is probably to keep running. Over the next 5 minutes that changed from “I can keep up this [slow] place – it’ll just hurt a lot”, to “I need to slow down, but I can keep running”…”maybe if I walk every other half-mile it’ll be OK”…”this is excruciating, I need to lie down”.

So I lay me down to rest, on my back on the grassy area next to the car park at Public Beach, with my leg up a tree to minimise swelling. Though for clarity, maybe I should add that the leg was still attached to the rest of me, and wasn’t ALL the way up a tree…

A few yards from me, a middle-aged man was doing loudly grunting exercises waving a very thick rope, while his two young children bemusedly looked on. I waved to him as I slowly collapsed, hoping that I didn’t look injured, because what would I be doing just lying there. But I was also hoping that I didn’t look like I’d wussed out on a run, because that would be worse. Maybe if I just looked like a guy in very short shorts who liked to lie down in car parks resting his leg up a tree, that would be OK.

An hour later, after nearly punching myself in the neck a little too hard a couple of times due to red ants, I am on a Clash of Clans chat room on my iPhone just as Jude has woken up and logged on. I mention casually my situation, and he does the sensible thing and wakes Rachael up to come and get me. The unfortunate aspect of that was that she was already awake, hoping I’d be home soon so that I could help her out of bed because her back was bothering her.

Instead she comes to get me and gives me a gentle verbal beating for not waking her up at 6.30pm to come and get me.

By mid-afternoon, it’s apparent that the three times it felt like I was stabbed by the red ants with a large spear, were only about 10% of the occasions they’d got me, and I was beginning to look like a plague victim. By the following day those bites look like zits except they’re very sore, and as I write this three weeks later, I still have scars on my arms and neck.

The moral of that story is: don’t lie on the grass in Cayman.

Or don’t twist your ankle.

Or you should sit down as soon as you twist your ankle and don’t move again.

Or force the government to build better-quality roads.

Or call you wife when you twist your ankle.

…ah yes, there it is – the lesson I am reminded of so often when I run but refuse to learn…