When the fireworks went off and the 1,500 of us in corral E shuffled over the start line, I hit start on my Garmin and play on my headphones…to the slowest, most ambient music I own.

I realized long before the race that I was going to be amped up to the eyeballs at the start, though I hadn’t anticipated being so emotional that I was fighting off tears. I also had read and heard many tales of experienced runners as well as marathon newbies going off way too fast and having nothing left by mile 20. I was determined that wasn’t going to be me, but also figured I would need help. Hence I figured about 7 miles of send-me-to-sleep music might be the best option.

So with unprecedented volumes of adrenaline in my system, fireworks exploding and in the middle of a crowd of runners at my first marathon, I trotted off slowly to music with a beat-rate less than half the pace of my cadence.

As I started I reaffirmed to myself that I really, REALLY wanted to break four hours, and prayed that I would be content simply with finishing, if 4 hours proved beyond my reach. After all, notwithstanding all my training I had never run over 22 miles in my life and my pace on that training run was 9:45/mile. I needed to find an extra 40 seconds and four miles from somewhere and was simultaneously very confident and completely clueless as to whether it was possible.

I decided to run the first mile at about 9:30 – just over 20 seconds slower than I would need to average over the race. Trying to hold my over-keen legs back to race pace might be too difficult, but going a whole chunk slower I figured would be easier and it was, although the slowest I could manage was a 9:20 for mile one and it felt like a warmup jog. I briefly thought about trying to do the same thing for mile two, but my legs said, “You must be kidding, we can kick this whole marathon sucker at 5K pace, NO PROBLEM”. So I managed to negotiate them down to almost bang on race pace, at 9:08 for mile two.

It was after mile 2 that I started passing what Ms RandomStranger called “corral thieves”: people who demonstrably didn’t belong in the corral they started in. For example some folks I was passing would have had to submit a previous race time of about 3:50 or faster which was necessary to be in corrals A through D and they weren’t on a 3hr 50mins run-walk strategy. They were on a 5 hours+ walk-jog-walk-walk strategy. Nothing wrong with the strategy, but, er…did you really have to lie about your time??

But they weren’t the only ones being caught and passed. I was caught by my friend Esther with her (running) buddy Jim at about mile 2. We hadn’t been able to find each other in corral E before the start, but this 45-year old lady who was doing the Dopey Challenge (5K, 10K, half marathon and marathon on consecutive days), had told me a couple of days earlier she was going to be taking it quite easy – perhaps even as easy as a 4-hour marathon – my life’s ambition – which would be 30 minutes off her best. We ran together briefly but then Jim got distracted by a Lambourghini parked on the race route and wanted his picture taken so that was that.

After seemingly interminable backroads, backlots, parking lots and service roads we finally made it to Magic Kingdom just after the 5-mile marker, with me at 9:12 pace overall – just three seconds off what I needed to crack four hours, clawing back the seconds I needed nice and slowly. Rachael and the kids were planning to be there and I was looking forward to seeing them…until we emerged onto Main Street USA leading up to Cinderella’s castle. There were thousands of people lining the route, which was a tremendous lift but had my legs whispering “5K pace, 5K pace” loudly in my ear. I don’t know how my legs were able to whisper in my ear but they did. I told them harshly to get back lower than my butt and do as they were told.

Unfortunately the adrenaline woke my bladder up again, which had been sleeping off the efforts of 5 pre-race contractions but must have worked really hard to find some fluid remaining in my body – probably spinal fluid – and decided it wanted to get rid 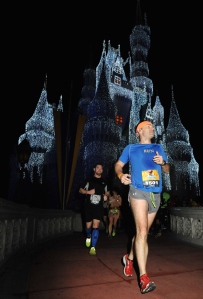 of that. Really wanted to get rid of it. I was distracted though by Cinderella’s Castle, lit up in the dark like it was covered in glo-snow, and looking far better than it ever did when I was just walking through Magic Kingdom. We ran around it, then through the middle of it back towards the crowds. I scanned them as closely as I could to see my crew but couldn’t find them. Rachael told me afterwards they weren’t expecting me as early as I got there, but she had randomly looked up for a moment, and saw me pass directly in front of her as I emerged from Cinderella’s Castle. Not the manliest backdrop, but very cool.

After such a long approach and then the rush of the crowds and the castle, it seemed like no time at all until we were leaving Magic Kingdom towards the Walt Disney World Speedway, which I hadn’t realised was part of the route until shortly before we emerged through the tunnel and onto the track. I made my brief pit-stop just before getting there, simultaneously pleading with my bladder about flow-rate and threatening it with dire consequences if I heard from it again in the next three hours.

A row of exotic-ish car owners had been given the opportunity to park on the speedway to take in the marathon ambience, and some were still huddled under blankets from the lingering chill as we went past. One particularly sweaty runner ran over to a ‘Herbie’-painted VW Beetle for a selfie, but seemed to suffer a severe case of fat thumbs while trying to get the camera app

open on his phone as the car owners gazed up at him, nonplussed.

Soon after the speedway and on the way to Animal Kingdom it became obvious that I no longer needed down-tempo music to keep my pace down – my body had no desire to go quicker than the prescribed 9:08/mile, so I switched my playlist to ‘Favourites’. I planned on saving the hard and very uptempo ‘Workout’ playlist for the last few miles when I figured I’d be most in need of it – if I turned it on at this point, with about three hours to go, it would have driven me slightly mad by the end.