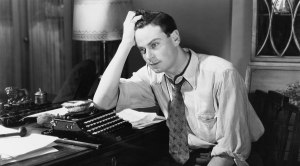 ng five posts on his debut marathon? The me kind…

20 miles down, 6.2 miles to go…just a 10K I tell myself. Do I think I’m stupid? There’s no point telling myself a 10K shouldn’t hurt when I can pretty much tell that the 20 miles I’ve already run is hurting and so another 6 miles is going to make it hurt that much more. Bleurgh.

I wondered to myself whether any uninjured person on target for their goal time has even stopped at the 20 mile mark. Maybe if lots of people have…there’s probably  a Facebook group for those people where everyone congratulations each other on reaching the big 2-0 in miles and fighting back against the lunatic idolising of 26.2.

20 miles is a long way dangit.

I keep up my speed-ambling.

22 miles…chocolate at the water station at mile 22(ish). Fantastic, that’s got to help.

My fueling strategy had been going remarkably well up to this point. My small breakfast of oatmeal at about 3.20am hadn’t caused me any problems, I’d had three of my gel packs and one new flavour that was handed out on the course…oh hang on, you’re not supposed to try any new flavours…oh well…

At a couple of water stops they also had bananas so I took those, and I’d been chugging water or Powerade at every available opportunity bar one since the start of the race.

So when, a few minutes after the chocolate, my digestive system checked in to say “Hi”, I gave myself a massive mental facepalm. What was I thinking? My nutrition strategy was working great, I’d never had a problem on a half-marathon or my long training runs…and now I was going to blow it all with bananas, chocolate and Powerade. Except mercifully it was a false alarm.

At 23 miles we were running through the backstage area of Hollywood Studious,

then on through the park, past the soon-to-be-removed Mickey’s Magician Hat. “Only one park…after this” was the encouragement at this point.

“One WHOLE park? AFTER this? That means we have two parks to go, and there are only five parks in total, so we’re barely over half-way…”

5K though…5K…anyone can do a 5K right? And I only had to do a 27:30 5K to make my four-hour target, and yet it still felt entirely possible that the wheels could fall off. 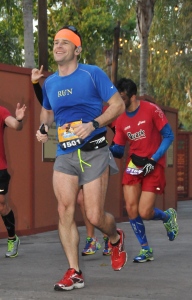 I’d read a lot about marathon running, about the physiological carnage being wreaked in my legs, about the calorie deficit I was operating on at this point which meant my body was using whatever lard it had dredged up earlier, plus my mid-race snacks. Dang chocolate.

Finally we entered Epcot and were down to one long loop around the lakes, past the giant golf ball thingy and then out into the parking lot. Even there, over 25-miles into the race, photographers were encouraging us to duck out of the run to have our photo taken. No-one was stopping.

OUT of the park to finish. My GPS watch read 3:57:00 and although I couldn’t see the finish line, we were coming up to the 26-mile marker and I knew for sure that I was going to make it. I could hear commotion up ahead as I passed by some sheds, turned a corner and…oh the joy of temporary fencing; that global symbol of home straights. Up ahead the spectators in stands welcomed family and friends and I started hunting for Rachael, Jude & Alice. Fortunately, as I’d never have picked them out otherwise, they stood up and I trotted the last 50 yards in some kind of altered state of delirium-cum-exhaustion. I gave Donald Duck as hard a high-five as I could muster and crossed the line in 3:59:16.

Several minutes later, beyond the finish-line area and with the first flush of my endorphin-adrenaline cocktail wearing off, my legs gave up. I desperately needed to sit down but didn’t have the strength to lower myself. A kindly volunteer of about 70 years of age and much smaller than me offered to help; I paused, declined …and almost immediately accepted. He helped me down and as I lay there he smiled and said, “Let me know if you need help getting up”.

Then Rachael, Jude and Alice arrived and the picture was complete. I had done what I never thought I’d be capable of – what I dreamed of 25 years ago knowing that it was impossible. And did it in a quicker time than I could have imagined.