‘Half-marathon.’ Even without the dash it sounds kinda rubbish…’Half Marathon’…or worse, ‘half marathon’ – like it’s a description rather than a noun. At first blush of course it sounds cool, especially if you mumble the first word and shout the second: ‘llf…MARATHON!!!’. But the more you hear it the more you realise that the name describes something that really ought to have been something else if only it would pull its socks up.

That’s not fair. 13.1 miles is a heck of a long way, can’t be done by many people without a good amount of training, and can only be done by some of us after a LOT of training.

It’s not HALF of anything. The marathon is essentially an arbitrary distance anyway (26 miles, 385 yards). Some dude called Pheidippides ran that distance

from the Battle of Marathon to Athens to deliver a victory message…and promptly DIED. Doesn’t that tell you something? It tells ME that marathons should be shorter, and have a different name. OR…marathons should consist of fighting a massive land battle and THEN running 26 miles, 385 yards which is what Pheidippides did. The prize for finishers would be a saline drip and a Gatorade bath.

So on to the matter at hand: a new name for a 13.1 mile race. Let’s make this happen. Runner’s World have talked about it a few times but there’s been no real momentum – perhaps because they’re too busy talking about whether or not Ultra Marathons are the new Marathons…really?? Give me a break. Maybe we’re talking to the wrong folk: Couch Potato Monthly might be the better people to engage on this issue – I’m sure their names for the HALF would be much more respectful. Rob Krar and his ultra-running fellow-aliens sprint 13.1 miles for a light warmup, but us normal people…humans…we need some more respect for the distance that made me cry with joy and relief when I first accomplished it.

Obviously I’m not the first person to think of or write about this. One commenter suggested calling it the ’Pikermi’, which is the name of a town half-way between Marathon and Athens…HALF-WAY…no…dude, you’re missing the point, we’re trying to get away from the whole HALF thing. Another blogger wanted to self-consciously annex the naming for America and call it the ‘Thirteener’. I’m not sure – other than the made-up word sounding English – what makes that name particularly American, but it doesn’t do much for me anyway – it sounds like a kids race name…a run for the preteen…ers.

So to help get the conversation (re)started, here are some serious and not-so-serious new name suggestions for a distance that would most likely not have caused the death of a Greek war veteran:

Let’s just stop running long distances altogether. Training would be so much less draining if the 5K became the new marathon and erstwhile half-marathoners switched to the 1500m. I sure wouldn’t miss the 3:20am alarm call for my weekly long run.

ONE-THREE-ONE/1-3-1
Predictable, basic, but workable as a moniker. There’s a certain dignity in mere numbers…a gravitas…that is missing from names. Same theory holds with models of cars: if you have to give it a name, it probably isn’t a serious enough vehicle – the Germans taught us that.

The day they changed the name of my favourite chocolate bar from Marathon (which is what it was called in the UK) to Snickers was a bad day – ‘Snickers’ sounded ridiculous to me. Somehow it sounds better as a race name, although we probably wouldn’t extend the logic to renaming the 10K, the ‘Fun Size Snickers’. Besides, races of 10K distance already have a pretty catchy name…

25K or 15 miles
If we’re really going to get respect for long distance non-marathon running maybe we need a clean break from 13 miles and 143 yards. 25K for the Euros or 15miles for the Brits and Americans. OK so the distances aren’t exactly the same, but they’re only half a mile-ish different, and it gives us all the chance for two new PR’s rather than one.

THE ELEUSIS (el-YOO-sis)
I don’t know how it’s actually pronounced but that’s how I’m pronouncing it. Eleusis is a town on the Greek coast, 13.3 miles west of Athens and a town of legend wherein the ‘Eleusian mysteries’ were once performed in honour of a Greek goddess. It 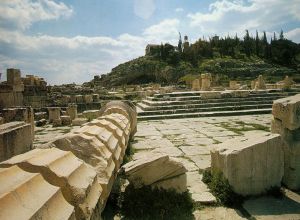 would be a picturesque route, keeps up the respect to the Greeks and gets my vote.

THE GLOBURNING
Sounds kinda edgy, it’s an anagram of ‘big long run’ and commemorative t-shirts designs would be way cooler, especially for those places (most of them) that don’t have obviously great landmarks to base their design around. Like Scranton, PA. Which would you rather do: the Scranton Abjectfailuretorun26.2miles event with its commemorative 1960’s office design shirt, or the SCRANTON GLOBURNING?

On the other hand, that sounds a little too reminiscent of Sir John Betjeman’s poem about England’s Scranton: “Come friendly bombs and fall on Slough, It is not fit for humans now…”