If I was American, or in a cold/seasonal country, or without an existing training plan, or if I had no big races planned in the next few months, the Runners World Run Streak would be a great idea.

The Runners World web-site describes it as being “designed to keep you running through the holiday season, and to bridge the gap between fall 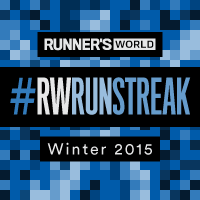 races and training for the spring. It can be difficult this time of the year to keep your running on track”. It involves a 37-day consecutive run streak of at least one mile, starting today on the invaders/immigrants/colonists/expats/pilgrims/whatever celebration thingy, and finishing on New Year’s Day.

I’m not American, I live in a hot country, I have a great training plan, I have a half-marathon in 10 days and a 30-mile race weekend two months after that. So really, the run streak for me would be entirely pointless.

Except for two things: 1.) It’s a challenge, and 2.) There’s bling. Virtual bling only, but bling none the less.