If I was between 75 and 79 years old my time would have been good for second in my age group category, and I kicked the 80-89 age group runners’ butts. In ‘reality’ though Meb

Keflizighi and I were duking it out for dominance of the 40-44 years age group, and if only they’d done the decent thing and operated a handicap system so that he started precisely 2 hours after me, we’d have been in a compelling dash/lurch for the finish line…heck, even ‘lurch’ is a strong word.

As I walked, officials were telling me to keep moving, folks were handing out bags of drinks and snacks, and then were the medal folks and then the photo-op people. After my 3:59:16 at Disney I’d have happily posed as long as they liked but here I wanted nothing to do with it. Then began the long walk to the exit located on 77th St. – an implausible eight blocks away. As I shuffled forward my legs started to get very painful, the shooting pain in the top of my left foot that came on at mile 24 was still there, and while I didn’t want to stop for fear of not starting again, I really needed to stop. 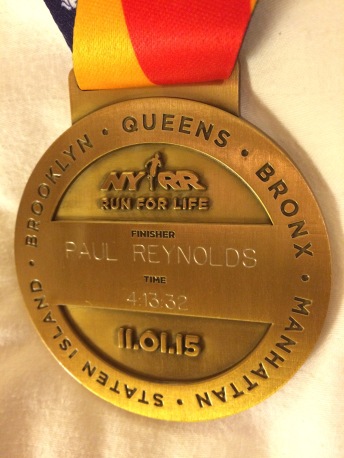 the fencing that kept us on the walkway. I paused and put my hands on my knees for a few seconds, after which I felt no better but was now also light-headed. I drank my Gatorade Protein Recovery Drink, my Gatorade Endurance Orange stuff and my bottle of water, and a few yards later I sat down and lolled against the fence.

A member of the medical team that was patrolling the area came up to me and asked if I was OK. I told him that my legs were too painful to walk on and that I was feeling light-headed. He helped me to my feet and asked me if I wanted a wheelchair. “No!” He walked with me with his arm around me but not supporting me, until I started leaning on him a bit more and he said yeah, we’re gonna need to take you to the medical tent. 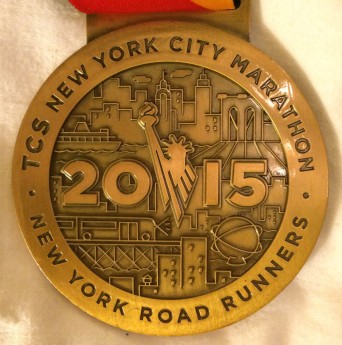 “Would you like to sit down or lie down?” 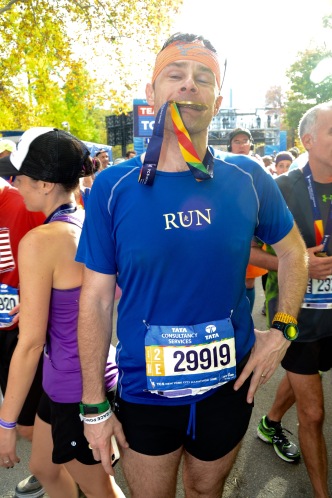 Apparently I was dehydrated. This was a swift if well-informed diagnosis that seemed corroborated by my drinking so much so quickly. It disappointed me to think that I’d drunk SO MUCH water in the previous few days, and then drank at almost every drink station on the route only to be told I was suffering from dehydration. I couldn’t see what else I could have done, or done better, on that front.

I had a little cry to myself while I was sitting on the chair. I hadn’t been able to phone Rachael because there was no reception available (clogged network), and I’d bonked, missed my time by a mile and wound up in an aid tent in pain. A medic came over and with a wonderfully sympathetic expression asked me what was the matter; “It’s OK, I’m just upset”. That seemed to satisfy her – they probably see a lot of that.

20-30 minutes later I discharged myself and shuffled the rest of the way out of Central Park, and the four blocks to Rachael – the best of sights for the sorest of eyes.

I’d felt in myself that I was probably looking at a 4:10-4:15 bearing in mind the hills and 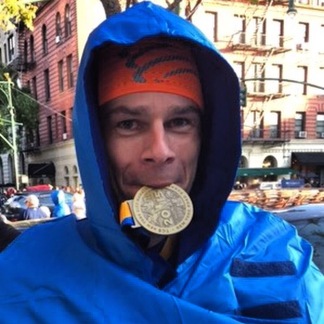 the added weight were probably going to more than offset my slightly better fitness level. The problem was that I had spent about an hour and forty-five minutes being almost certain that I would make it under four hours. What with positive thinking being such a…y’know…positive thing, I encouraged rather than squished those thoughts, only to have them summarily ripped from me at mile 22 and then on the way up 5th Avenue.

Rachael was having none of it, saying there was no way I could have made it in under four hours given all the circumstances and that I’d done incredibly well to achieve what I did.

Besides, I’m 41 years old – that’s ‘Masters’ age (what a wonderful euphemism for decreased competence due to an excess of life). It wasn’t a performance problem then – and not because I was too young to have my time look good (as I had been thinking), but because I am too old for my time to actually BE good.